Excerpts from the Healthy Brain Initiative

What is the Healthy Brain Initiative?

The Alzheimer’s Association and the Centers for Disease Control and Prevention (CDC) partnered to create the Healthy Brain Initiative to promote public health knowledge and awareness about Alzheimer’s as a public health issue. 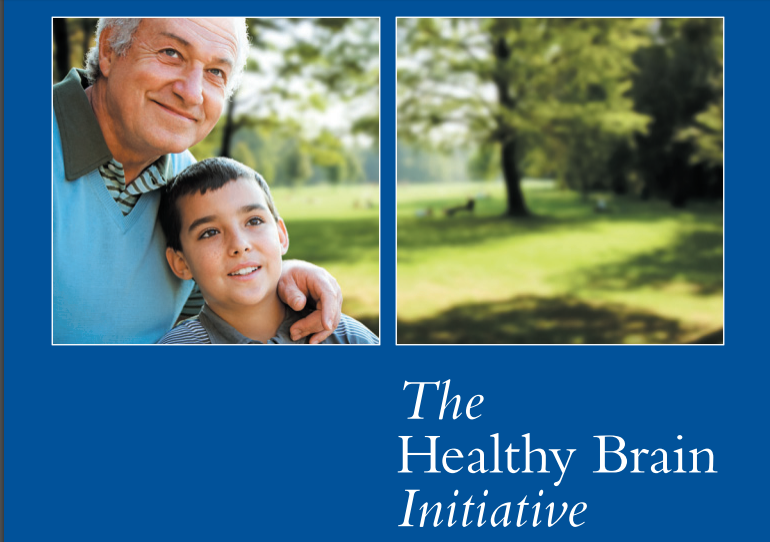 Productivity, independence, and quality of life for millions of Americans depend on the nation’s collective ability to prevent and treat cognitive impairment and dementia, and to promote cognitive functioning for individuals living in our communities. To accelerate efforts to meet these goals and help incorporate cognitive health in the plans and initiatives of states, territories, and communities in the U.S., we [CDC] look forward to working with our partners to implement the actions identified in The Healthy Brain Initiative: The Public Health Road Map for State and National Partnerships, 2013–2018.

The Healthy Brain Initiative envisions a nation in which the public embraces cognitive health as a vital component of health and is committed to its inclusion in public health efforts. To achieve that vision, the long-term goal is to maintain or improve the cognitive performance of all adults.

The long-term goal of the Healthy Brain Initiative, to maintain or improve the cognitive performance of all adults, can only be achieved through collaborative and effective partnerships at national, state, and local levels. The coordination of contributions by private, non-profit, and governmental partners may provide leverage for synergistic opportunities, and more comprehensively address and promote cognitive functioning and the needs of care partners. Thus, the Road Map does not focus on any individual agency or entity but instead encourages groups to work collaboratively to use and incorporate the action items into their own strategic planning efforts

Cognition can be viewed along a continuum—from optimal functioning to mild cognitive impairment to Alzheimer’s disease and severe dementia—and may include tasks involved with cognitive function such as: language, thought, memory, executive function (the ability to plan and carry out tasks), judgment, attention, perception, remembered skills such as driving, and the ability to live a purposeful life.

What is cognitive impairment?

When cognitive abilities are impaired (often referred to as cognitive impairment), a person has trouble with cognitive processes that begin to affect the things he or she can do in everyday life. Dementia is not a disease itself, but rather a syndrome defined by a group of symptoms that often occur together in various combinations and severity. Alzheimer’s disease is the most common cause of dementia and along with other conditions such as stroke and traumatic brain injury can result in impairment in cognitive abilities. It is important to note that some causes of cognitive impairment are related to treatable health issues (e.g., medication side effects, vitamin B12deficiency, and depression).